Weekend Walkabout: Painting What You See, and What You Don't See

So I've been putting in a little more time in the mini-studio, working on watercolors! They are wonderful challenges because you get one shot, that's it. No erasing, no painting over. One shot.
Frustration or fun, you never know which, when you're a newbie like me:

Here is a hot-press, controlled painting based on the wonderful artistry of Mithila/Madhubani artwork from India: 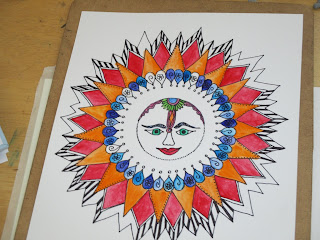 And of course, there's photography based on my weekend walkabouts, both indoors and out:
Our Fish Crows in Residence, Hugin and Munin, have returned, so I promise a post soon...have a wonderful Weekend Walkabout!

Weekend Walkabout: Who Put That Flower There??

I have no idea how sunflowers got into my garden, but I'm glad to see them!
I suppose it could have been birds who dropped a few seeds a month or so back, maybe? And the Spanish Moss, one of my all time favorite Tillies, is doing fine now....
A little painting in the studio makes for great weekend. Happy Weekend Walkabouts, fellow gardeners and painters!

The Monarch In My Window

Danaus plexippus is indeed perplexing down here in the tropics. Monarch butterflies are generally migratory, but it seems, as happens with many tourists, that once they get down here, they have a Jimmy Buffett moment and can't be bothered to leave. Too much sun, too many mojitos. It happens.

I decided, after Irma's wrath leveled my garden, to plant more butterfly-friendly things. Of course milkweed was purchased and planted up. 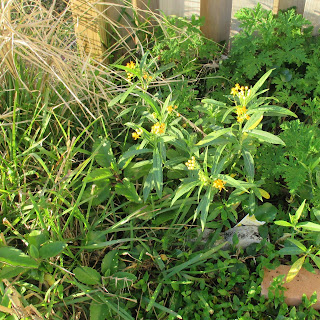 Sure enough, two caterpillars appeared a week or so later. They grew through all 5 of their instars, then high-tailed it away from the milkweed at a seemingly impossible pace, toward my house! I do not know what happened to one of them, it was too fast, but the other decided to pupate on my screen door, and on the inside, too. 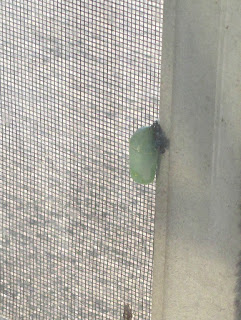 I named it Hebert, after the Hebert Box that Hurricane Irma so obligingly zoomed through on its way to us. You can consult the Mighty Google if you want more info on the Box. Several weeks went by, as did several cold fronts. Hebert was protected inside the screen and by doing so, stayed warm enough to live. This morning, the chrysalis blackened, and when I returned home from an errand, I saw this: 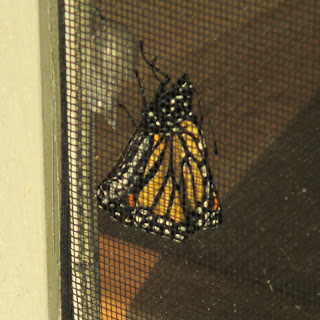 Wow! The wing pattern was female, so I had to change her name to Heberta. She crawled right up the screen until she found the handle, and used her tiny claws to cling upside down and let her wings unfurl and dry for exactly two hours. 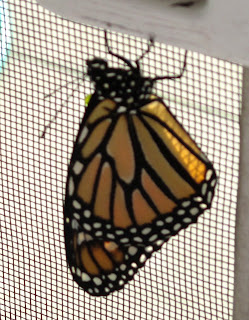 I was worried she'd fly into the house, but a few gentle maneuvers as she began to flap ensured that she was able to zip away into the garden. What a beautiful morning! I finished a butterfly painting just in time for Heberta's rebirth: 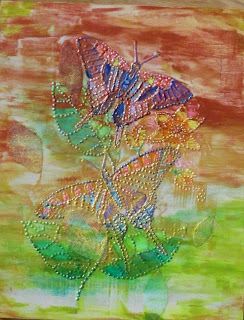 I kinda miss her now!

Posted by Unknown at 1:28 PM No comments:

The Different Company is a delightful French perfume house that launched back in 2000, which makes it of very great and venerable age in the niche perfumery world. It was originally headed by the equally venerable, even famous, perfumer, Jean-Claude Ellena. He became so venerable that he retired, and now TDC, as it's known by perfumistas, is headed by his daughter, Celine Ellena, who works with a variety of perfumers. She now has 29 fragrances in the collection. I'm doing mini-reviews of my three current faves: Une Nuit Magnetique, Santo Incienso, and I Miss Violet. 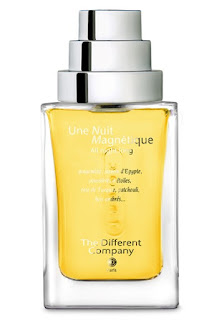 I love Une Nuit Magnetique (by Christine Nagel) in part because it's an amber/oriental, and I own a ton of those, and also because it's the only blueberry perfume in my collection. It might be just about the only blueberry perfume in the world, excepting Demeter scents, they must have a Blueberry Muffin. Soft, radiant amber merges with mouthwatering blueberry, and a little piquant ginger suitably accents the whole. It's comforting without smelling like a blueberry cobbler, and works well in all kinds of weather. Even hurricane weather. 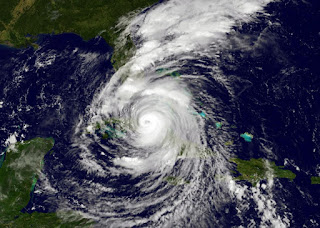 This is the one I wore during Hurricane Irma. I needed olfactory comfort real bad, and frankly, the smells that go with a hurricane, especially the aftermath with no electricity or running water, are not pretty. Une Nuit Magnetique got me through. Sadly, I now have trouble wearing it because it reminds me of Irma! So be careful what you wear during natural disasters, I've warned you. 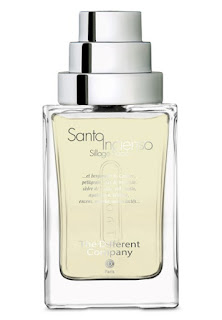 Santo Incienso, from 2017 and signed by Alexandra Monet, highlights one of my favorite woody scents, palo santo from South America. Palo santo has an incredibly powerful odor, and it really wakes me up! It is so intense and unique, in fact, that it's very hard to work into a perfume. It takes over the operation like Al Capone at a flower show. Santo Incienso was a happy surprise; nutmeg, a variety of resins, and petigrain are added. You can't really pick them out, but it modifies and tames the palo santo, which is still very much the star of the show. It doesn't last very long, but it's bracing and original. Well done. 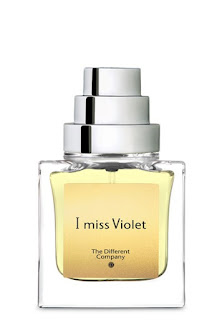 This little number is quite the shy violet, which is very odd, because it's by Bertrand Duchaufour, who is not known for retiring, subtle perfumes. It's quirky, though, and that fits his style. Lovely green violet leaf and flower joyfully burst out of the bottle; within about 15 minutes, a soft suede and contemplative iris take over. If you've tried his Cuir de Nacre for Ann Gerard, imagine it with a vivid, green-violet intro, and you've got the idea. It's not a clone, but it's definitely a riff on the same theme. The opening reminds me very much of The Unicorn Spell (remember that one?) without the green bean. After the first quarter hour, I Miss Violet wears very close the skin, and it's gone after a few hours. That's not considered a minus, anymore, it seems, and most of us want our perfume pretty subtle by the time we get to work. At any rate, it's a lovely gem.

Posted by Unknown at 9:43 AM No comments:

As if Alert Gardeners Didn't Know....

Plants can choose! Well, they choose in more limited ways than we can, because, except for Tillies and orchids, they are stuck in the ground.

So when a competitive plant muscles into their patch, they can choose to deal with the resulting shade by becoming more shade tolerant, have a growth spurt and take the new guy's sunshine, or creep away (non-palm grasses, gingers, and many others can grow north, south, east, or west, rather than up or down like a tree). This is the equivalent of fight or flight in mammals, I suppose. Want to read more? Here it is in Science Daily:

This makes me wonder what they choose with, exactly. We simian lifeforms are awfully brain-o-centric. Do plants have some sort of distributed consciousness? I'd like to know!

To all my readers, all over the world, Happy 2018! I know we all hope it will be a better, brighter, more peaceful year than 2017! 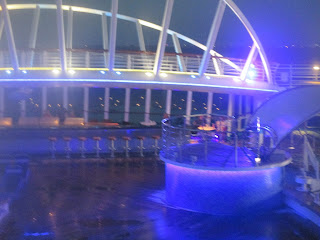 My Mammillaria and I wish you a very happy winter holiday! I hope that for all of us, 2018 is a more peaceful, joyful year. Our Hurricane Irma repairs are about 75% finished, and I was so happy to see most of my Tillies are pupping, and my lone Mammillaria is blooming. I'm replanting my outdoor garden with butterfly and bird friendly natives. Nature will continue.

Weekend Walkabout: Only a Few Years Ago

What a difference a mere handful of years can make in the 21st century on Earth. Here are a few photos from my island "back then":

The Florida Marsh Rabbits and nearly all the flowers are gone now after being Cuisinarted by 2 strong hurricanes. I do not think they will return. Of course, a friend of mine who's been here longer than I have reminded me that my island is a human-created dune. It's only existed for a handful of decades-- so is its return to the sea less sad because of that? I miss the way it used to be, even if that was only the bat of an eyelash in Gaia-time.

Sometimes I feel that when I'm uploading these images to Google, I'm uploading images of our fragile, changing world to the New Virtual Ark. Will Google's AI find them interesting enough to preserve? Will Google's AI survive on a planet where humans cannot? I don't know! And I do remain optimistic, which is perhaps silly at this point, but we've come through crises before. Still, I do feel like uploading some more photos of my little island each week....

Posted by Unknown at 9:51 AM No comments: